Omega3-6-9 is actually a combination of omega-3, omega-6, and omega-9 fatty acids. These acids are all very important dietary fats and all have unique health benefits for your body such as help to reduce heart disease.

That being said, the most important thing to note when taking these three distinct omegas is that you are consuming the right balance, or a ratio of them, as taking more or less of some of them can result in health complications.

The best way to dive into a discussion of the benefits of omega3-6-9, and be able to effectively decide which omega3-6-9 supplements are better than others, is to first understand the difference between the three different omega fatty acids.

Nature Made is a well-known brand when it comes to supplements like Omega 3-6-9, and has a strong reputation for quality. Unlike many other Omega 3-6-9s, Nature Made relies on oily fish and plant-based sources to make their soft gel capsules. They also keep those pesky supplements at bay by guaranteeing no artificial flavors, colors, preservatives, yeast, starch, or gluten. In order of sources, Nature Made uses mostly fish oil, followed by flaxseed, safflower, olive, and soybean oil. It also contains vitamin E to prevent the fatty acids from oxidizing.

Also worth mentioning is the aftertaste of this supplement, as some people are turned off by oily-tasting omegas, and from our experience with them, we found no fishy aftertaste or heartburn. Additionally, the product does not contain any shellfish or pig gelatin, which can be used as the exterior gelatin in other capsules.

Sundown Naturals is another great brand known for its various quality vitamin and mineral supplements. This product also contains tons of fish oils from anchovies, sardines, salmon, and herring, as well as flaxseed and borage seed oil. Sundown is also known for being as pure and safe as they can, and this product is non-GMO and contains no gluten, wheat, milk, lactose, artificial color, artificial flavor, artificial sweetener, preservatives, sugar, starch, yeast, shellfish, or sodium. It is also purified to eliminate mercury from the fish oils it uses and the gelatin is not made from pork.

Sundown Naturals uses a proprietary blend of omega 3-6-9 with a ratio of around 4.5:1:1 which in our opinion is an excellent blend putting an extremely high priority on the omega-3s with 1354 mg and a total of 1916 mg of combined omega oils.

In our tests, we also found that this supplement had no fishy aftertaste and went down quite smoothly. Sundown Naturals are slightly more expensive than Nature Made and we attribute this to the high amount of omega oils and particularly omega-3 oils per serving.

NOW is another supplement brand and, although it is less well-known that the previous two brands, they have a very strong reputation for providing quality vitamins and minerals. Each softgel contains borage oil, fish oils, and flaxseed oil, as well as vitamin E to prevent oxidation. It is tested to be free of potentially harmful levels of contaminants such as mercury, heavy metals, PCBs, and dioxins, and contains zero sugar, salt, starch, yeast, wheat, gluten, corn, milk, egg, shellfish, or preservatives.

This product contains 345 mg of omega-3 fatty acids with a ratio of 3:3:2 for Omegas 3:6:9 for a total of 855 mg per soft gel at a recommended serving size of 2 soft gels per day. In our trial of NOW, we found there to be no fishy aftertaste nor did we have any reflux.

NOW has the least favorable omega-3 proportion out of any on our list so, if you know that you are getting enough omega-6 and omega-9 in your diet, we recommend that you forego NOW and go with Sundown Naturals. NOW also tends to be more on the pricey side due to high-quality ingredients so, if you are on a budget, Nature Made would be a better choice. Overall, though, now has a great reputation and we had favorable results from their product. 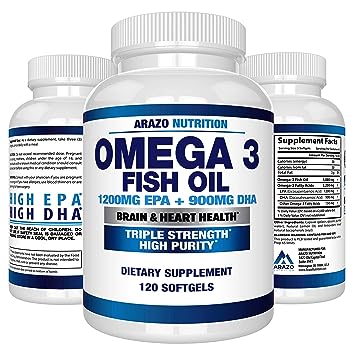 This is the most commonly supplemented omega fatty acid and the reason for this is that omega-3 is polyunsaturated fat, which means the human body is incapable of synthesizing it on its own.

For this reason, omega-3 is considered an essential fatty acid and, unless you are consuming enough of these in your diet, experts recommend that you supplement with at least omega-3 daily.

The breakdown of the Latin prefix poly in polyunsaturated fats means “many”. Therefore, they have many unsaturated fats, which refers to the chemical composition of the molecule, indicating that it has many double bonds between atoms.

The “omega-3” portion is unsurprisingly also rooted in molecular chemistry and indicates the position of the final double bond in the chemical structure—three carbon atoms at the tail end of the molecular chain.

Experts and international organizations, like the World Health Organization and American Heart Association, advise consuming at least two portions of oily fish every week, as oily fish particularly are rich in omega-3. At the risk of learning more, once we look deeper into omega-3 we find that there are three different types.

Alpha-linolenic acid (ALA), which is commonly found in plant oils, is an 18-carbon fatty acid that can be converted into either of the other two omega-3s and is mainly used by the body as a source of energy.

Eicosapentaenoic acid (EPA) is commonly found in oily fish and is a 20-carbon fatty acid that is mainly used to produce eicosanoids which function as anti-inflammatory chemicals. EPA has also been shown to help reduce symptoms of depression.

Docosahexaenoic acid (DHA), which is also commonly found in oily fish, and is a 22-carbon fatty acid that is approximately 8% of a normal human brain’s weight and is super important for normal brain function and proper brain development.

The scientifically supported benefits of omega-3 is numerous and includes preventing asthma and dementia, promoting proper bone health, mental health (by reducing symptoms of depression, bipolar disorder, schizophrenia, and other psychotic disorders), and infant brain development, assisting in weight management, combating inflammation (as it is an anti-inflammatory), decreasing liver fat, and most importantly improving heart health (as omega-3 has been shown to increase “good” HDL – High Density Lipid – cholesterol and reduce blood pressure, triglycerides, and the formation of arterial plaque).

Omega-3s are, by and large, the most important fatty acids to supplement our bodies with, as they are the only “essential” Omegas, but what about the other two? 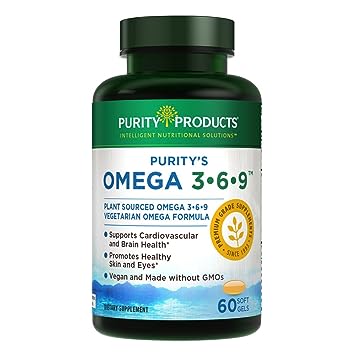 Omega-6 fatty acids are also essential, but in contrast to omega-3s, consuming too much omega-6 can result in a detrimental health effect, as the human body is not well equipped to handle more than the recommended amount.

Omega-6 is also polyunsaturated fatty acids, and the only chemical difference between omega-6 and omega-3 is that the final double bond is a total of six carbons from the omega end of the molecule.

As mentioned, omega-6 fatty acids are mostly used by the body for energy, and the most common omega-6 is a linoleic acid which the body can convert into longer omega-6 chains such as arachidonic acid (ARA).

Experts and international health organizations recommend that the intake of omega-6 to omega-3 should be anywhere from 2:1 to 4:1, but that any more than this could have adverse health effects. That being said, omega-6 fatty acids have been proven to treat numerous symptoms in chronic diseases.

CLA, or conjugated linoleic acid, is an omega-6 that has been shown to reduce body fat mass in humans when taken in moderate quantities. GLA, or gamma linolenic acid, is another omega-6 that is converted by the body into DGLA, or did homo-gamma linolenic acid, and can reduce several symptoms associated with rheumatoid arthritis. It has also been suggested that GLA can boost the effects of certain breast cancer-treating drugs, making them more effective than when taken without GLA.

Other than in oily fish, omega-6 fatty acids are found naturally in most raw nuts and seeds, hempseed oil, sesame oil, sunflower oil, pistachios, grapeseeds, safflower oil, olive oil, pumpkin seeds, wheat germ, and Chia seed oil. Overall, omega-6 is an essential fatty acid but should be taken in moderation as omega-6 is commonly found in the Western diet. 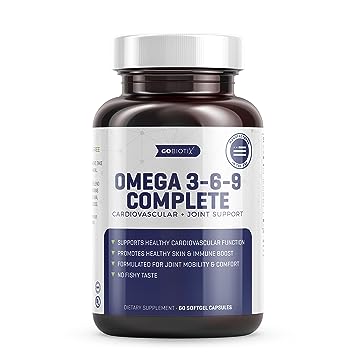 Omega-9 is a monounsaturated fatty acid that only has one double bond located exactly nine carbon atoms away from the omega end of the molecule. This is by far the most commonly found fatty acid in modern diets and, by most standards, is not considered to be an essential fatty acid, which means that the human body can produce omega-9 on its own. The most common omega-9 fatty acids are oleic and stearic acid and the body can produce these whenever it has enough omega-3 and omega-6 in the body already.

Forward-thinking diets have started replacing saturated fats with omega-9 fats and this can lead to much better metabolic health in humans. Some studies have indicated that diets high in monounsaturated fat can improve insulin sensitivity and decrease inflammation by reducing plasma triglycerides and very-low-density-lipoprotein cholesterol, particularly when compared to diets high in saturated fats. It has also been shown that omega-9 fatty acid plays a big role in promoting overall heart health by improving immune function and balancing cholesterol levels

SO BASED ON THIS INFORMATION, WHAT SHOULD I LOOK FOR IN AN OMEGA3-6-9 SUPPLEMENT?

Most omega 3:6:9 supplements contain all three omegas in a ratio of 2:1:1, which is recommended, as a priority should be given to omega-3, while the overall ratio means that all of them will benefit your body in conjunction with each other.

In fact, priority should be given to any omega3-6-9 supplement that prioritizes omega-3 over the other two, and there should be a minimum of around 0.3 grams of omega-3 per serving.

Furthermore, polyunsaturated fatty acids oxidize easily when subjected to heat and/or light, so when looking for supplements, it is recommended that you choose one that has been cold-pressed and extracted with very limited heat and has also been fortified with antioxidants like vitamin E.

Moreover, it is important to be aware that EPA and DHA omega-3 fatty acids have been shown to have more health benefits than ALA and the supplement you choose should reflect this by coming from fish oil or algal oil rather than flaxseed oil.

To sum it all up, we now know the differences and varying importance of omegas 3, 6, and 9, as well as the suggested daily intake and proportions of each of the omega oils to one another.

Omega 3 is by far the most important, as it is an essential fatty acid, and Omegas 6 and 9 are important, but specifically when taken in moderate amounts.

Our particular favorite of these three is Sundown Naturals, as it has the highest proportion of omega-3 to -6 and -9, and the highest overall dosage of omegas per softgel.

Additionally, we liked that it was specifically non-GMO and seemed to stay away from all of the unnecessary fillers and additives that can be found in other products.

Overall, however, all of the brands above reflect what we think are the best omega 3-6-9 supplements out there, but remember that it is important to reflect on your specific daily diet to determine which one has the best amount and omega ratio for you.